Maple trees grow in virtually every area of North America. These hearty trees thrive in a number of different climates. Lumber obtained from these plentiful deciduous trees can be used in a variety of different applications. Two of the most popular species are Soft and Hard Maple.

Soft Maple is sometimes referred to as Red Maple. Don’t let the name “Soft” fool you, as it’s actually a relatively hard wood. It’s only called “Soft” because it isn’t quite as Hard Maple. Soft Maple’s grain lines tend to move in different directions, giving it plenty of character. Soft Maple has a darker heartwood than Hard Maple as well as latewood lines that are a beautiful reddish-brown color. These latewood lines make Soft Maple wood appear to have a pink cast.

This particular species of Maple is normally found in the Eastern United States near the Atlantic coast. Though it has a specific growing region, it’s still easy to come by and is generally more affordable than Hard Maple. Though it lacks Hard Maple’s polished luster, it still boasts a classy look when finish is applied to it. Soft Maple is a great wood to work with, because it’s solid enough to retain detail work without being overly hard on woodworking machinery.

Hard Maple also goes by the names of Sugar Maple and Rock Maple. That final nickname is a reminder of how impressively hard this wood is, especially for a domestic species. Because it’s so dense and hard, it can wreak havoc on woodworking machinery. On the positive side, it’s ideal for moldings because it tends to retain clean, straight edges. Other common applications include flooring and cabinetry. Hard Maple works well for both of these jobs because of its durability and stability. 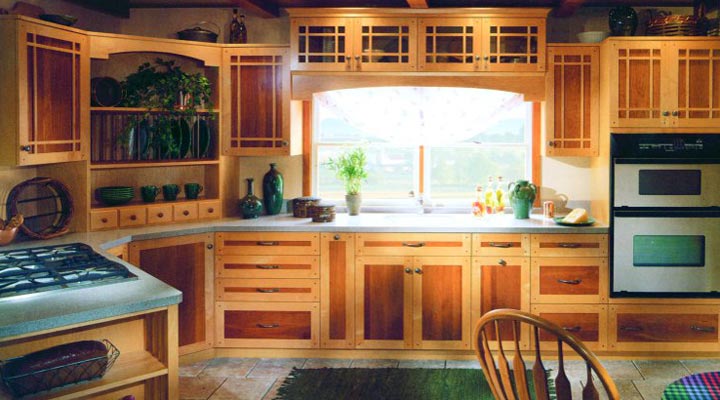 One of the most interesting qualities of Maple, whether you’re dealing with Soft or Hard Maple, is its tendency to show unique grain patterns. This is sometimes referred to as “Figured Maple.” These would include Curly, Quilted Spalted, Bird’s Eye and Tiger Striped effects, to name a few. These effects, while looked upon unfavorably by those seeking to use it for cabinetry and flooring, are ideal for instrument and furniture crafting.

If you plan to purchase either Soft or Hard Maple from your local lumber yard, make sure to let them know what use you have in mind for the wood. Any reputable dealer should be able to point you in the right direction when it comes to choosing the best product for the job. Let them know if the appearance of the aforementioned grain irregularities is something that would or would not be desirable for your project. Thankfully, because both species of Maple are abundantly available, you should be able to find what you’re looking for pretty easily and at a decent price.